Mountain guide Alan Kimber in the role of Norman Collie, myself and mountain guide John Lyall as John MacKenzie

IT was the most unlikely setting for a meeting, and one that saw me becoming involved in the most exciting television project of my career.

In 1993 I was in Russia with a group of trekkers, backpacking around the base of Mount Elbrus, Europe’s highest mountain, before climbing to the 5,642 metres/18,510 foot summit. Sharing the icy flanks of the mountain with us was Chris Bonington, Britain’s best known mountaineer. Chris was working with a small film crew, making a film about his attempt on the Seven Summits, the highest mountains in each of the seven continents.

Once we had all climbed to the top we retreated to the relative luxury of a valley hotel and enjoyed a few beers together. Over several beers I had a long chat with Richard Else, the film crew’s director, about the contribution made to Scottish mountaineering by Scotland’s finest mountain writer, WH Murray.

Richard was keen to make a documentary about Murray. At that time, in the early nineties, Bill was in his eighties and not in the best of health and Richard passionately believed there should be a television archive of Bill, a record of the man and his considerable achievements.

Some weeks later, BBC Scotland accepted the proposal but rather than a one-off documentary about Bill Murray they suggested a much bigger project, a six-part series that would document the past century of Scottish Mountaineering. It would be broadcast throughout the UK on BBC2 and Richard felt it was important to have a television presenter who climbed, so he asked me. Naturally, I accepted!

Initially we had two major problems. Firstly, how on earth were we to choose the subjects for six programmes from the plethora of great mountaineers Scotland had produced in the previous hundred years, and secondly, we only had four months to film and produce the six programmes. We started filming in January 1994 and we had to deliver everything by Easter.

It was an incredibly tight schedule but we were blessed with some phenomenal winter conditions and a film crew that was willing to work incredibly long hours in the most difficult conditions to get the climbing action we required. On many occasions our camera operators and safety crew wouldn’t get off the hill until well after dark, on some occasions as late as nine or ten in the evening, and then be up at the crack of dawn to start all over again. Without their total commitment and sheer professionalism we wouldn’t have produced anything.

This attitude contrasted greatly with stories I had heard from Tom Weir about film crews insisting they were back at their vehicles by five o’clock, and cameramen who demanded proper lunch breaks. In contrast, virtually everyone in our crew was a climber; cameramen, sound operators, runners and producers, and we were supported by a superb safety team made up of seven qualified Mountain Guides expertly led by international mountaineer Brian Hall. The combined experience and mountain awareness of the whole team was to prove invaluable time and time again.

Before we began filming Richard and I spent a lot of time visiting and talking to climbers about the subject matter. Tom Weir was very helpful, as was Hamish MacInnes who, sadly, couldn’t appear in any of the films as he was busy. Eventually we decided on a mixture of biographical and thematic films that we hoped would each represent a particular era in the development of mountaineering in Scotland between the 1890’s and the 1990’s.

We began with an examination of one of the finest climbing partnerships in the history of the sport, the unlikely pairing of Victorian scientist Professor Norman Collie and the Skye-based mountain guide John Mackenzie. The two men climbed together every time Collie visited Skye. On each visit he would immediately contact Mackenzie at Sligachan, and the two would formulate plans for the holiday. The guide to client relationship quickly grew into a deep friendship and the two men, from such contrasting backgrounds and cultures, were bound together by a common love and appreciation of the Skye Cuillin. They were eventually buried side by side in the little graveyard near Sligachan on Skye.

Our original inspiration, WH Murray, was the subject of the second programme, and represented the era up to the outbreak of the Second World War. We decided to film an account of Murray’s ascent of Tower Ridge on Ben Nevis, his last climb in Scotland before going off to the war. This film, shot in remarkably good winter conditions, later won a Scottish BAFTA award.

On Murray’s return from the war he didn’t try and compete with the new generation of Scottish climbers, people like John Cunningham, Tom Patey, Jimmy Marshall, Robin Smith and Hamish MacInnes. According to Murray these men “had a speed and confidence we simply hadn’t possessed.” Another era was about to begin.

For this new era we concentrated largely on the contribution made by Edinburgh climber Jimmy Marshall and his relationship with the likes of the younger Robin Smith and Dougal Haston. The American mountaineer Yvon Chouinard described Jimmy Marshall as being “the real genius of the decade.” He was six years older than Smith and eight years older than Haston but Marshall was undoubtedly the inspiration behind the climbing success of a whole bunch of young Edinburgh climbers, collectively known as the Currie boys.

Though a relative unsung hero of Scottish and UK mountaineering Jimmy Marshall has been inextricably linked to the development of cutting edge climbing in Scotland during the 1950′s and 60′s. In one legendary week on Ben Nevis in 1960 Jimmy Marshall and Robin Smith transformed the shape of Scottish winter mountaineering, advancing it a full ten years. On consecutive days the two men climbed six first winter ascents, including the mini Alpine-route Orion Face Direct, while also making the second and much quicker ascent of Point Five Gully for good measure – in seven hours as opposed to more than 40 hours when previously climbed.

We filmed Jimmy climbing on the Buachaille Etive Mor and even at the age of 62 there was a precise ballet-like movement in his climbing, a vertical grace that was a sheer joy to watch.

Robin Smith became one of Scotland’s finest ever climbers but sadly died at the very young age of 23 in the Pamirs. Haston became the first Scot to climb Everest in 1975 and later moved to Leysin in Switzerland where he died in an avalanche in 1977. 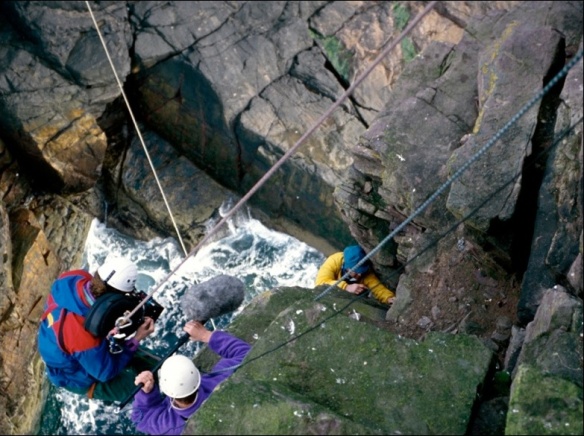 The fifties and sixties saw a huge explosion in interest in climbing and mountaineering in Scotland, with standards rising proportionally. While the Creag Dubh club in the west and Marshal et al in the East were leading the way many climbers were heading to the unexplored grounds of Scotland’s far north-west. One of them was Doctor Tom Patey from Aberdeen, one of the most charismatic Scottish mountaineers of the century.

Few climbers have matched the long-lasting charisma of Patey and when he died in an abseiling accident after climbing The Maiden, a quartzite sea stack off Whiten Head in Sutherland on 25 May 1970, it brought to an end a tremendous mountaineering career that had lasted twenty years.

To the public at large he was known only through the Old Man of Hoy BBC television spectacular in 1967 (which had an audience of 15 million) but inside the small mountaineering world he was a familiar and well loved figure. From his very first ascent on Lochnagar’s Douglas-Gibson Gully in 1950 to his very last climb, which led to his premature death at the age of 38, he was a major and significant player on the Scottish climbing scene.

Our final programme was very much a look at modern developments, as they were then, and we followed the climbs of three young Scottish Mountaineers, Rab Anderson, Dave Cuthbertson and Dundonian Graeme Ettle. This was at a time when climbing was changing fast. Better equipment, different attitudes and greater fitness saw the likes of our three climbers search our and climb some of the most technically difficult routes in the country, but other forces were at work too – indoor climbing walls were becoming fashionable and young climbers were training hard for sports climbs, bolted climbs, and even climbing competitions. It seemed that traditional climbing in the Scottish sense was being overlooked.

In an interview at the time 26 year old Graeme Ettle said: “There are any number of climbers of my age climbing hard on indoor walls or on bolted routes, but very few are active at the highest levels during the winter. In areas such as Beinn Eighe there are acres of climbable lines, all in the top grade, the equivalent of E3 routes and above in winter conditions. If more young climbers had as much commitment to winter climbing as they have to summer sport climbing the result would be tremendous, but it’s not happening. Wall climbing takes place in such a controlled environment that it is very hard to imagine anyone breaking away from it. If I am on a route and fail, then I am involved in hours of hassle before I reach safety. If you fail on a wall, you simply drop off and go home. Where is the comparison?”

Today, twenty years after Graeme’s comments, that specialisation he refers to has solidified. Rock climbers flood to the sports-climbing crags of the south while others, like Dave MacLeod, has brought the gymnastic skills of the climbing walls to outdoor crags like Dumbarton Rock, Ben Nevis and Strone Ulladale on the Isle of Harris.

Three years ago, in another Richard Else-led outside documentary, viewers watched a live ascent of the great overhanging prow on this Hebridean rockface by MacLeod and fellow climbers Tim Emmett. It was a fascinating and gutsy display of modern rock climbing at its highest level.

While it’s safe to say that much of the earliest exploration of the Scottish highlands took place in the first half of the twentieth century climbers are still discovering new crags and new potential lines, even on some of the popular crags. Last year I bumped into Andy Nisbet, one of Scotland’s climbing legends, and he was being very wary about telling me where he was heading. There is still a strong competitive element amongst those who seek out new crags and new lines and few Scottish climbers have as many first ascents to their name as Andy Nisbet.

There have always been peaks and troughs in the development of climbing in Scotland and in all the peaks, and more importantly, in all the troughs, there have still been climbers on the hills enjoying themselves. The vast majority of these climbers will not be challenging the prevailing standards, nor creating new routes, but just accepting the challenges the mountains pose for them as individuals. Most climbers, then and now, don’t particularly worry whether the sport that we know as mountaineering is developing or stagnating. It’s a personal game, and most of us take part in it, and love it, at that level.

Twenty years on from the filming of The Edge, there are still those pushing the standards of mountaineering in Scotland, and while hundreds annually line up in queues to climb Everest the mountains of Scotland still provide a technical challenge for some of the best climbers in the world.

And twenty years on from the first showing of The Edge on UK television perhaps it’s time the BBC commissioned a follow-up, to bring us up to date, a programme that could showcase some new faces, the modern stars of Scottish mountaineering?