First steps above the snow line

SPRINGTIME in Scotland can be frustrating. Just when you’re convinced that winter has gone and you can relegate the ice axe and crampons to the gear store the promise of spring turns out to be a lie, and winter returns to bite you. And sometimes quite savagely…

I had spent the night in Strathcarron where there was a distinct scent of spring in the air. It was a smell of warm earth, of new grass, the faintly sweet coconut perfume of early bracken growth. Or was it my imagination? The next morning dawned grey, and cold. The hills had turned white overnight, springtime swept away by winter’s hand for another few days. Or weeks. I had planned a round of the Coire Lair Munros and I drove along to Achnashellach in a dark mood, just like the big hills on either side of the road, my previous optimism having plummeted like the barometer.

Once kitted up (I fortunately had an old ice axe in the campervan) I felt better, and how could anyone maintain a black mood when walking up the track out of Achnashellach and into Coire Lair, one of the best approaches to any group of hills in Scotland? I crossed the railway, pleased that Network Rail hadn’t seen fit to ban pedestrians from crossing the railway line, as they’ve done in dozens of other crossings throughout the nation, followed the forestry track through the woods before dropping down to the old stalkers’ path that follows the deep gorge of the River Lair.

What a fabulous start to a walk, with pine trees sheltering the path that climbs over sandstone slabs, crinkled and creaked with streaks of quartz that glint and sparkle in the sun. Presiding over this part of the Achnashellach Forest like some prehistoric watchtower, the 2976ft Fuar Tholl, or cold hole, is one of the most impressive hills in the land. Its three tops are guarded by steep cliffs of Torridonian sandstone, soaring skyward from the lower pine-clad levels of Coire Lair. The hill radiates three spurs, to the north, the south and to the south-east, and it’s on these spurs that the great rock features of the mountain are prominent. Between the north and the south-east spurs lies the Mainreachan Buttress, a magnificent mass of terraced sandstone, which seems to be suspended above a tiny lochan below the north face of the mountain.

As I climbed over the lip of Coire Lair I took a moment or two just to take in the scale of things. The two Coire Lair Munros are the attention-grabbers here – Sgorr Ruadh on the left and the long, knobbly ridge of Beinn Liath Mhor on the right. The classic Coire Lair Horseshoe walk gathers both of them in, the two hills linked by a high pass, a high portal that carries a good footpath from Coire Lair into the very heart of Torridon at the Ling Hut in Glen Torridon.

I once set off from the Ling Hut on a very misty morning, eager to get to grips with the two fine Corbetts that lie to the north of Beinn Liath Mhor, Sgorr nan Lochan Uaine and Sgurr Dubh. It was an incredibly dank day and visibility was down to a few feet. I had followed the track above the Ling Hut and I felt confident enough in my timing to know roughly when I would reach the col between the first Corbett and its southern neighbour, the Munro of Beinn Liath Mhor.

Unfortunately my timing was out and I found myself scrambling up scree slopes in what felt like the wrong direction. Eventually I stumbled across a huge cairn where several folk were eating their lunch. I hadn’t a clue where I was so rather than admit I was lost I nonchalantly enquired if anyone knew the correct pronunciation of the peak we were on. “Ben lee-a vore,” came back the answer. I was on the wrong mountain!

Smiling at the memory of that encounter I made my way towards the Drochaid Coire Lair and a cairn that marked the steep route up the south-east ridge of Beinn Liath Mhor’s eastern top. It wasn’t long before I was in the snow. It was soft and unconsolidated and not very pleasant. Things improved as I approached the first summit at 876 metres – the wind had blown the soft snow clear and the scree slopes were much easier to walk up. Unfortunately the easy conditions didn’t last long.

By now I was in the cloud and in the odd clearing I looked out into a monochrome world. The combination of lack of colour, the shifting mists and awkward underfoot conditions unsettled me and I momentarily considered returning the way I had come. Just beyond this eastern top of Beinn Liath Mhor an awkward pinnacle bars progress to the narrow ridge beyond and I cursed myself for not bringing crampons with me. I tentatively crept round the side of the pinnacle on hard neve to see the narrow corniced ridge drop down to a high bealach below. The mist prevented me seeing any further. 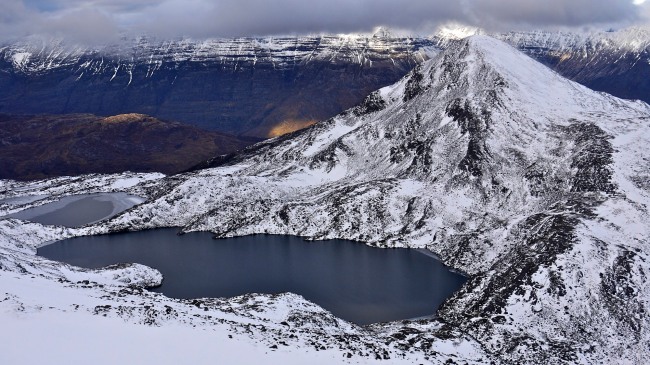 Then, suddenly, it was gone. It was like a curtain being lifted on a stage when the audience gasps at the beauty of the stage set. Instead I gasped at the sheer expanse of the view around me. The hills close at hand were still in monochrome but behind me, to the south-east, there were splashes of colour – the blue of the sky and orange of the sun-dappled mountains. With spirit now soaring I romped down the ridge, climbed to the second summit of Beinn Liath Mhor and gasped in astonishment at the scene that had now opened up. To my right the lovely little Corbett of Sgorr nan Lochan Uaine rose impressively above its dark lochan and beyond it the great steep wall of Liathach was splashed with colour as the sun broke through the cloud. To my left Sgorr Ruadh, the second of the Coire Lair Munros, rose from the dark depths of the corrie, its buttresses riven with steep snow filled gullies. Ahead lay the western top, and summit, of Beinn Liath Mhor, looking like a separate mountain in its own right, its summit ridge snow covered and inviting. Beyond it all lay Loch Torridon and beyond it lay the Trotternish peninsula of Skye. Beyond it, shimmering on a far horizon, lay the hills of Harris. 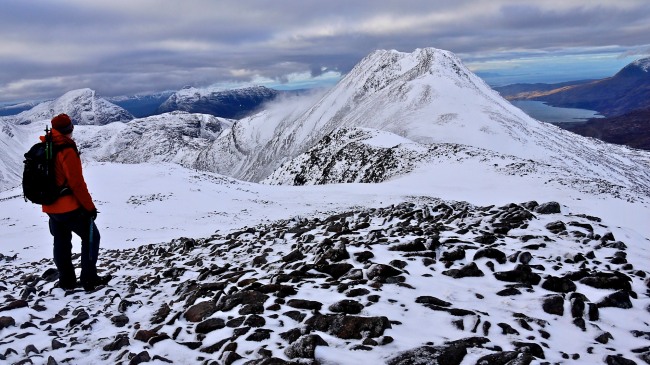 The summit of Beinn Liath Mhor

I sat on a rock and spent some time summit spotting, trying to recall Gaelic names, before climbing the final steep rise to the summit ridge. Another undulating ridge, a blend of quartzite scree, moss, snow and ice led me to the giant summit cairn where the view of Loch Torridon and the other Torridon hills was superb. But I didn’t hang around. Time was ticking inexorably onwards and I still had a long way to go. I also knew the descent to the Bealach Coire Lair could be awkward, navigating through and around some steep sandstone crags and an awkward cliff-girt knoll which is best avoided on its left.

From the frozen lochan that seems to fill the narrow bealach, I followed old footsteps in the snow over steep slopes to a small lochan on the north-west ridge of the day’s second peak, Sgorr Ruadh, at 962 metres. From there it was a straightforward, if steep, scramble on a snow and scree-covered footpath all the way to the summit, with thrilling views across the glen to the multi-topped ridge of Beinn Liath Mhor.

As far as I’m aware the classic Coire Lair Horseshoe only includes the two Munros but strong walkers will take in the next hill, beyond the Bealach Mhoir, which is Fuar Tholl, the smallest of the three but the finest. I suppose Fuar Tholl is living proof that Munro-bagging is a bit of a nonsense, albeit a delectable one! Many walkers come to Coire Lair and climb the two Munros leaving the best hill in the area for another time, probably post-Munro compleation. I didn’t have time to include it today – it was already later afternoon and I knew I’d be walking out in the dark, but I’ll describe the hill to you anyway, as some kind of compensation for not including it in my wintry round.

Fuar Tholl is best climbed by taking its northern slopes head-on, crossing the top of the Mainreachan Buttress to reach the summit. From here an interesting line of descent follows the rim of the south-east corrie, a ridge which is tight and rather airy near the top. Soon you can scramble down to the lochan in the corrie and then down the slopes back to the River Lair. If the river is low you can easily cross to the opposite bank to the outward path back to Achnashellach. If, however, the river is high you’re best staying on the south bank all the way down to the railway line.

In the gathering gloom I dropped down snow covered slopes to the Bhealaich Mhoir and then, avoiding the steep buttresses on my left, followed the stream down to Loch Coire Lair and beyond it, the footpath that would carry me back down to the woods of Achnashellach. At the lip of the corrie I turned and looked back on the hills I had just traversed, watched them gather the gloom to themselves, shrouding themselves in the darkness that was falling fast, inscrutable and implacable, caring little for what season of the year it was. I gave an involuntary shudder, and scuttled down the glen by the light of my headtorch, feeling tired and glad that I was going home after a great day.

2 thoughts on “The Round of Coire Lair”