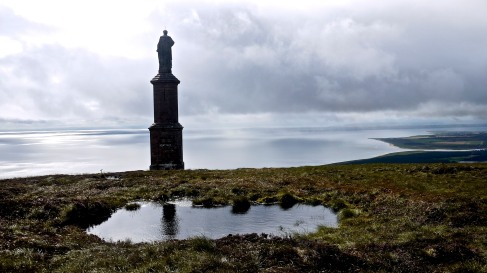 I could vaguely recall the words of the old music hall song.

‘Where the heather bells are blooming just outside Granny’s door, Where as laddies there we played in the days of long ago.

In the shadow of Ben Bhraggie, near Golspie’s loudly stane…’

As a laddie there wasn’t much in bloom near my own granny’s door in Govan but the sentimentality of the old song still touched a chord as we left the outskirts of lovely Golspie and climbed through the pines in the shadow of the controversial Duke of Sutherland.

At a height of 1302feet/397m Ben Bhraggie is no giant as hills go but the 100 foot statue and plinth, known locally as The Mannie, that dominates the hill and the east Sutherland town of Golspie below it, is controversial.

The edifice was erected in 1837 to the memory of George Granville Leveson-Gower, Baron Gower of Stittenham, Vicount Trentham, Earl Gower and 2nd Marquis of Stafford. In1785 he married Elizabeth Gordon, Countess of Sutherland and in 1833 (only a few months before his death) he was created 1st Duke of Sutherland for his services to politics. But it was his role in the Highland Clearances that brought him notoriety

The local community have done a superb job is creating some mountain bike trails on the slopes of Ben Bhraggie and the route to the summit, and the giant statue, shares some of the trails. A car park at the foot of the hill, at the top of Fountain Road, gives access to the routes. You just have to be careful you don’t come face to face with a kamikaze biker coming round a blank corner! If you don’t have the constitution for such an encounter you can avoid the bikes by sticking with the tarmac beyond Fountain Road, passing the farm and looking out for signs for the Ben Bhraggie footpath.

We were climbing Ben Bhraggie because rain and wind had soured earlier plans to climb Morven in Caithness, but some weak sun and hopeful clearances in the weather encouraged us to get the boots on and take some exercise. Bhraggie looked like a good stomp, even if The Mannie did cast something of a shadow. The evening before we had camped in Strath Naver and had spent some time wandering around the ruckles of stone that represented the former village of Rosal. The Duke of Sutherland may not have personally removed the families who once lived there but his henchmen James Loch and Patrick Sellar did. Sellar was later acquitted of murder, only for him to take over one of the massive sheep farms the evictions created. He went on to become a very successful and very wealthy farmer but the resentment that was created burns in the highlands to this day.

The route to the summit weaves its way in and out of the trees, forces its way through some almost impenetrable bracken and carries you through a gate below an impressively steep mountain bike bridge. From here the footpath has eroded its way through heathery slopes, the colour of which offered some brightness on an overcast day. The Sutherland statue, on its great sandstone obelisk, gazes out over the green coastline of the Dornoch Firth and into the anonymity of the North Sea.

We sat below the monument for a while and I thought of an old friend who passed away a few years ago. Sandy Lindsay was a former Scottish National Party councillor on Highland Council and in 1994 he proposed the monument’s demolition. As far as I can recall he lost the vote as there were Sutherland councillors who believed that the monument reminded people of the horror of the Clearances rather than celebrate one of the perpetrators of the events. Later on Sandy altered his proposal, asking permission from the local council to relocate the statue to nearby Dunrobin Castle and replace it with interpretive plaques that explained the story of the Clearances. Sadly, nothing came of it.

Inland the glowering grey of rain showers were sweeping down from the higher tops so we left The Mannie to his sea-gazing and took a different route of descent before the showers reached us. Over the summit we went and down a long curving track that eventually eased its way back downhill towards the forest and the coast passing Lawson’s Well on the way. The well was created in 1837 to provide water for the men and horses who carried the statue to the summit of Ben Bhraggie. Lawson was the name of the engineer in charge.

Ben Bhraggie is the subject of a walk I’ll be taking in tomorrow night’s Adventure Show on BBC2 Scotland at 7pm.

1 thought on “Ben Bhraggie on the Adventure Show”